Ever wondered why our wastewater disposal costs more than our freshwater supplies from the water company?  Part of the reason is the average 50 lbs of toilet paper used per person each year. In the UK alone, that equates to an environmental cost of 91 billion gallons of water, 53,000 tons of bleach, and over 3 million trees – every year.  Toilet paper costs us a lot of money. To the rescue comes San Francisco-based innovator Box Clever with Sonny, a patented Portable Bidet. 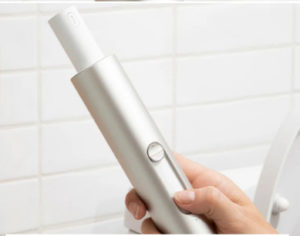 Those who have experienced life in France know bidets are ubiquitous and originated there. Bidets (or bidet showers) are today also commonplace in Japan, Finland, South America, South and South-East Asia and the Middle East. Users of bidets claim they provide faster and more effective cleaning of your rear (and front) than the skin-irritating method of continual wiping with chemically-loaded toilet paper.

What are your views on how we can reduce our personal eco-impact? We live in times when there is so much focus on healthier lifestyles, whether the importance of a good night’s sleep if we want to avoid dementia and possibly, Alzheimer’s, or the use of food waste for clothes-dyeing, single-use plastics or made-on-demand zero-waste jeans. Please let us know what you think in the comments section below this article.

The Sonny portable bidet raised half a million dollars through crowdfunding and is being sold for $79 in Soft Silver or Dusted Champagne premium-quality finish; it provides an instant solution for all those U.S. and UK diehards who claim standard bidet purchase, plumbing and electrical costs are prohibitive. The Sonny is simply a tube with a single button that doubles as a slider; slide the button and out pops a nozzle; press the button and the nozzle sprays – voila, all done! Might be an idea though to use warm water, as the Sonny does not heat the water.

We at House and Home Sitters constantly seek ways to travel more sustainably and not only minimise our impact on the environment but even positively contribute to this. Everyone is now increasingly aware of the need to do our bit as individuals for the greater good of our planet and all its people. As shown by the war on plastic straws, modern-day consumers will no longer accept or tolerate big businesses (or small) that disregard their responsibilities to reduce or eliminate the pollutive impact they create and then ignore. Following huge public pressure, McDonalds and Starbucks partnered in a competition to design an open-source compostable takeaway drinking cup. Imagine eliminating the 250 billion plastic cups cluttering rubbish dumps and landfill sites each year – and taking up to 1,000 years to biodegrade. At the other end of the spectrum, we abhor those people who are litterbugs, too lazy to dispose of their rubbish in the bin and who prefer to just throw this out wherever they are. A zero-tolerance approach and stiff fines in various states in the U.S. have worked wonders in terms of clean and litter-free roadside and other public spots there. If only the UK authorities would follow suit…

The UN Intergovernmental Panel on Climate Change has warned in its 700-page report on global warming that we have just 12 years to limit climatic catastrophe, and consequent famine, disease, economic tolls, and refugee crises. The minimum requirement to do so means global greenhouse gas emissions must be slashed to 45% below 2010 levels by 2030 and reach net zero by 2050.  Coal consumption must be reduced by at least a third. We have all heard much of this before, but 12 years is a very short time. The very future of mankind itself is at risk.

Next, we have overfishing. The top predator of our oceans, the shark has been decimated by the demand for shark fin soup. At $200 per pound, the regulators trying to protect shark populations – which have fallen as much as 92% over the past 50 years – are fighting a losing battle. Even baby sharks are fair game to the many illegal fishermen. And, despite shark meat being toxic, loaded with mercury and other poisonous substances (as a result of their being meat-eating predators), this is increasingly being sold in supermarkets and other marketplaces under different names which disguise that this is shark meat, as both pet food and for human consumption. The wholesale slaughter of sharks has created an eco-crisis in terms of certain fish and crustacean populations sky-rocketing and resultant ecological imbalances.

In 2019 the Grupo Modelo Brewery in Mexico won a bronze award for its Corona Beer Fit Packs at the Cannes Lions International Festival of Creativity. Customers carry up to 10 cans thanks to an interlocking system to replace six-pack plastic rings. Grupo Modelo has made its blueprint free so all can-makers can adopt this design.

Imagine a world without plastic rings… 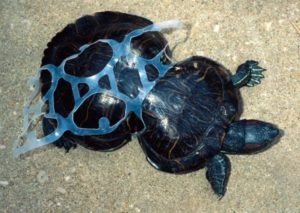 Quoting their hashtag #FlyingTheChange, Portuguese airline Hi Fly introduced the first plastic-free single-use air travel in December 2018, using crockery and cutlery made from bamboo-compostable materials. Hi Fly’s CEO Paulo Mirpuri has undertaken the airline will at the latest achieve zero single-use plastics by the end of 2019. Mirpuri also addressed the “Plastic Free World” Conference in Frankfurt, Germany in June 2019 on the dangers of single-use plastics and plastic pollution in general. Following the conference, Mirpuri joined a panel discussion on ‘The role of citizens in tackling plastic waste’.  Interesting stuff. Paulo Mirpuri has become known as the man behind “Turn the Tide on Plastic”.

Ah, this article would be remiss if it did not mention plastic water bottles in their billions polluting the Earth, more especially for those of us living in the UK where we’re privileged to have water from the tap that is perfectly good to drink. All the fuss about bottled water seems so unnecessary and more of a status symbol than any so-called health reasons. Yes, there might be some limestone in tap water, but that has been shown to have no ill-effects on our health; on the contrary, many bottled-water drinkers are taking calcium supplements which are actually derived from limestone! Over 480 billion plastic bottles were produced worldwide in 2016 alone; that’s over 60 bottles for every man, woman and child in the world. Our plea is for people to stop supporting that giant rip-off called bottled water.

At House and Home Sitters, we try to show our dedication to improving the world even if it’s only a little at a time. On walks, we take a spare refuse bag along and do our bit by picking up the rubbish. We want our children and grandchildren to enjoy their surroundings and not risk cutting themselves on broken glass or discarded cooldrink cans. We constantly encourage environmental awareness in our family, among our house sitters on their house sitting assignments, and among our friends.

We even produced our own in-house video:

Your comments and input would be most appreciated. If you liked this article, please share.