Without first addressing our plastic addiction we cannot tackle the climate crisis.

We at House and Home Sitters advocate strongly against our ongoing societal plastic addiction, that Big Plastic Elephant ever-present in our room. We also support action against the toxic global greenhouse gas producers, having learned that plastic production accounts for 15% of such global emissions – equivalent to the total emissions of all forms of transport: aircraft, lorries, buses and cars put together. Who might have imagined that? Oil in the form of petroleum and natural gas are the primary sources of plastic manufacture, so it is a dirty process from beginning to end, involving invasion of the ground for oil, including fracking, the toxic by-products of refinement and production, not to mention the death and destruction caused by plastic waste in our environments.
Did you know:

Bottled water is not a health solution. This illusion needs to end. Plastic bottles are such a huge threat to our environment, certain countries are considering a ban on the manufacture of water bottles.

From our side, how can we do our share to stop the accumulation of plastic wastes? This is our thought for the day which we share with you…

Closing this article on a positive note, we are inspired by Isle of Wight husband and wife team Wyatt and Jack who have set up a thriving business creating sustainable bags and accessories from upcycled beach deckchair canvas, broken inflatables and retired bouncy castle vinyl pvc collected on beaches and river banks. From the London Parks of “The Smoke” to the sandy island beaches on the Isle of Wight, their fabrics are upcycled from various sources, each one telling the story of its previous life and all products are handmade in their Bembridge & Ryde workshops. To date Wyatt and Jack say they have kept over 100 tons of plastic out of UK landfills. 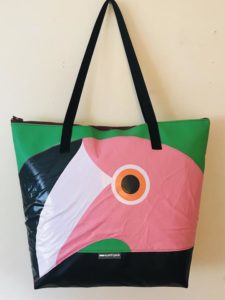 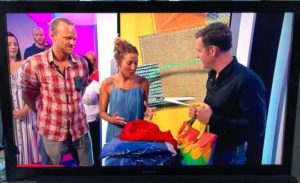 In another inspirational development, its team motivated by the extent of plastic pollution on local beaches, YUDesign of Spain has recently been honoured by a James Dyson Design Award for its development of a mooring buoy, YUNA, that filters microplastics from the oceans. These highly toxic fragments measure no more than 5 mm and get ingested by sealife, not only a hazard to them but also entering the human food chain. It is estimated by 2050, plastic pollution in the sea will weigh the same or more than the total mass of all fish. In an effort to contribute to the resolution of this pollution, YUDesign was influenced by the form of Ocean sunfish and exactly how they adapt to transforming ocean currents.
To aid in the resolution of this major problem and drawing inspiration from the adaptive movements of ocean sunfish to sea currents, YUDesign designed the YUNA buoy to passively accumulate these bits of plastic as its floats and rotates in the current, through a variety of filters used to gather different-sized microbeads, including charcoal to filter the smallest fragments.

The polythene buoy, itself resistant to breaking into particles, is very basic, needing just one mould for the two halves of the buoy’s outer structure, thus reducing costs of manufacture.  This also maintains manufacturing expenses low, setting you back simply 20 per cent greater than a common buoy.

Gradually, the public is beginning to register the alarming impact of plastic on on our oceanic ecosystems. These microplastics (aka microbeads) used in health and beauty products are able to pass through many water “purification” filters, but the YUNA will collect them. We at House and Home Sitters hope the YUNA will help inspire all of us to protect our local beach and river and lakeside environments against this truly dangerous threat.